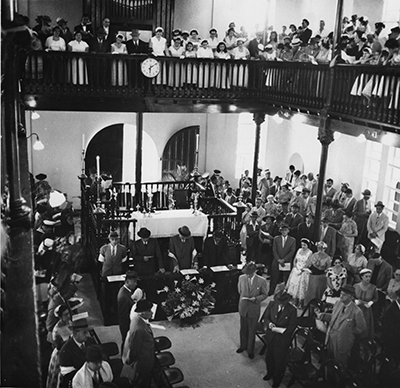 Our synagogue Sha’are Shalom was rededicated in 1912, having been rebuilt on its present site due to the damage by the earthquake of 1907. It is the most recent , built in a long line of synagogues. The first was in Port Royal prior to 1692, Spanish Town since 1704, Montego Bay and several in Kingston.

Jews settled in many towns across the island. At one stage there were some 21 cemeteries. Presently we count 13, with two in use. The oldest, Hunt’s Bay, has graves dating from the 1670s. The plan is to bring all under proper maintenance in the coming year.

The Jewish contribution to Jamaican life as a community has focused largely on education. To highlight two outstanding contributions: The Hillel Academy was originally started as a preparatory school and was founded in 1969. It now offers secondary education culminating in the International Baccalaureate Program; after Hurricane Gilbert in 1988 which devastated Jamaica, the community established Reading Rooms at the University of the West Indies with some assistance from the Joint Distribution Committee and the United Way of Jamaica.

Jamaican Jews, over the centuries, have participated in aspects to economic, cultural and social life. This included the professions, mercantilism and the arts and culture.

In 2006 we celebrated the 350th anniversary of continuous Jewish worship in Jamaica. On this occasion we opened the Jewish Heritage Centre. This Centre comprises the Sanctuary, the Exhibition of artifacts based on our Religious practices, the Poster Room whose posters are published here, the selection of Art from some of our Jamaican Jewish Artistes, the Video Archives and the Memorial Garden with its tombstones from the 18th century.