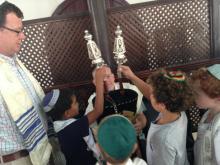 The mission of  The United Congregation Synagogue is to join with our members in    building a community where the practice of Progressive Judaism enriches and uplifts  our lives with understanding, warmth, friendship and meaning.

Our synagogue Sha’are Shalom was rededicated in 1912, having been rebuilt on its present site due to the damage by the earthquake of 1907.  It is the most recent , built in a long line of synagogues.  The first was in Port Royal prior to 1692, Spanish Town since 1704, Montego Bay and several in Kingston.